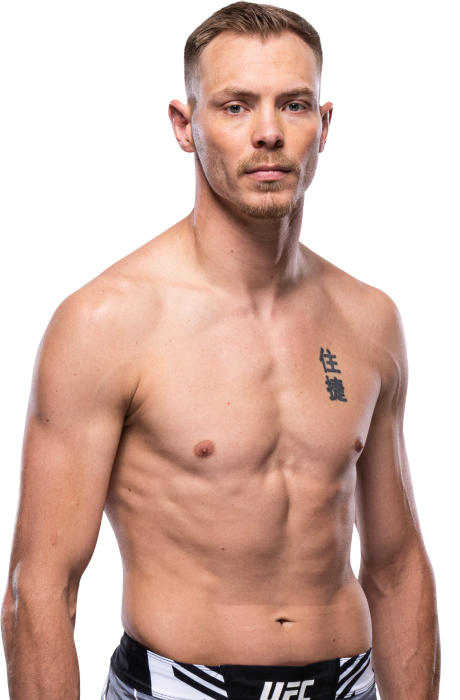 Q&A
When and why did you start training for fighting? I have your typical start: I found wrestling in high school and immediately found my passion. After a year in junior college and not being the best student, I returned home. I found Jiu Jitsu shortly after I turned 20, because that desire to compete was still driving me. My Jiu Jitsu trainer joined up with a local MMA Gym (Art of War), and that is where my striking journey started. I got my butt kicked in my first sparring session and I knew I had to focus on my striking. For the next three years I only fought Muay Thai under Kobb Thongsia, fighting all up and down the west coast. Fast forward three years later, I finally made my MMA debut. I had three MMA fights and went pro and I've been chasing this opportunity ever since.
Do you have any heroes? Dan Gable, Muhammad Ali, Anderson Silva, Jordan Burroughs, GSP, Yodsanklai Fairtex.
What does it mean for you to fight in the UFC? It is accomplishing a huge dream of mine, a dream that started the moment I watched Forrest Griffin and Stephan Bonner fight on The Ultimate Fighter finale. I’m also showing my nephews and niece that if you want something and you commit to the marathon of work it takes to accomplish it, then you can do whatever you put your mind to.
Did you go to college and if so what degree did you earn? I spent a year in college but, like I said, I wasn't a very good student. Immature, mostly I didn't understand the grind of school.
What was your job before you started fighting? I worked at a lumber company (Rosboro LLC) for nine years. Two years as an operator, three as a lead, four as a supervisor. I chose to go after this dream completely in 2019.
Specific accomplishments in amateur competition? Muay Thai accomplishments: 2x Useaca Muay Thai, Cmta Champion, MTG Champion, Saaas Muay Thai Champion.
Specific accomplishments in pro competition? X1 World Events Welterweight Champion
Ranks in any martial arts styles: Jiu Jitsu brown belt
Favorite grappling technique: Any one that will get the job done.
Favorite Striking technique: You can expect the left kick