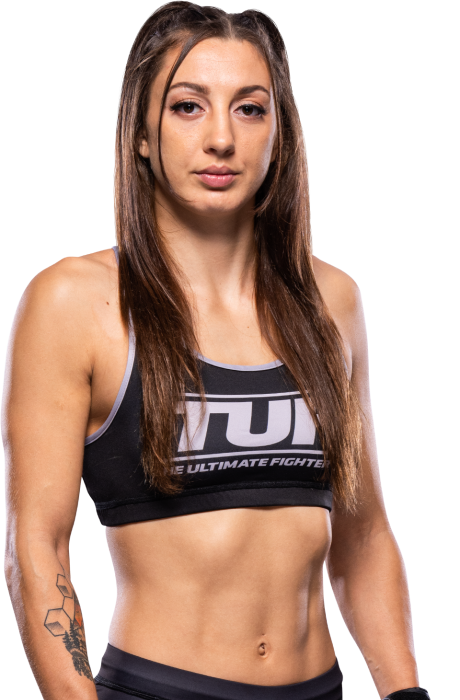 UFC History
TUF 30
In the semifinals, Miller submitted Kaytlin Neil via Kimura in the second round
In the quarterfinals, Miller won a three-round unanimous decision over Claire Guthrie

Q&A
When and why did you start training for fighting? What inspired me to begin MMA is, I was in an abusive relationship and didn’t defend myself and got beat up. I was so angry I wanted to fight and not get arrested, so I decided to do it in a cage. Then I wanted to help women in toxic relationships learn self-defense, so I want to start a women’s self-defense course and a kids’ self-defense course for dealing with violent parents. What inspired me to go pro was the opportunity to get well known so I could make a bigger impact and additionally hunt for financial abundance while doing what I love.
What ranks and titles have you held? BJJ brown belt
Do you have any heroes? I didn’t have just one most influential person; there was actually three or four 1) Ilima Macfarlane 2) Scott Nelson 3) Pearl Gonzales and 4) Prime Hall.
Did you go to college and if so what degree did you earn? Didn’t graduate but was studying kinesiology and nutrition
What was your job before you started fighting? Bartender, server, massage therapist, kids’ jiu jitsu coach, cryotherapy health place, American Icon Sports Management, and puppy sitter. Also, private training sessions.
Specific accomplishments in amateur competition? Amateur CA state champion, Epic Fighting Champion.
Specific accomplishments in pro competition? Submission on the Shore advanced division champion, CJJ Mexico super fight winner 2x.