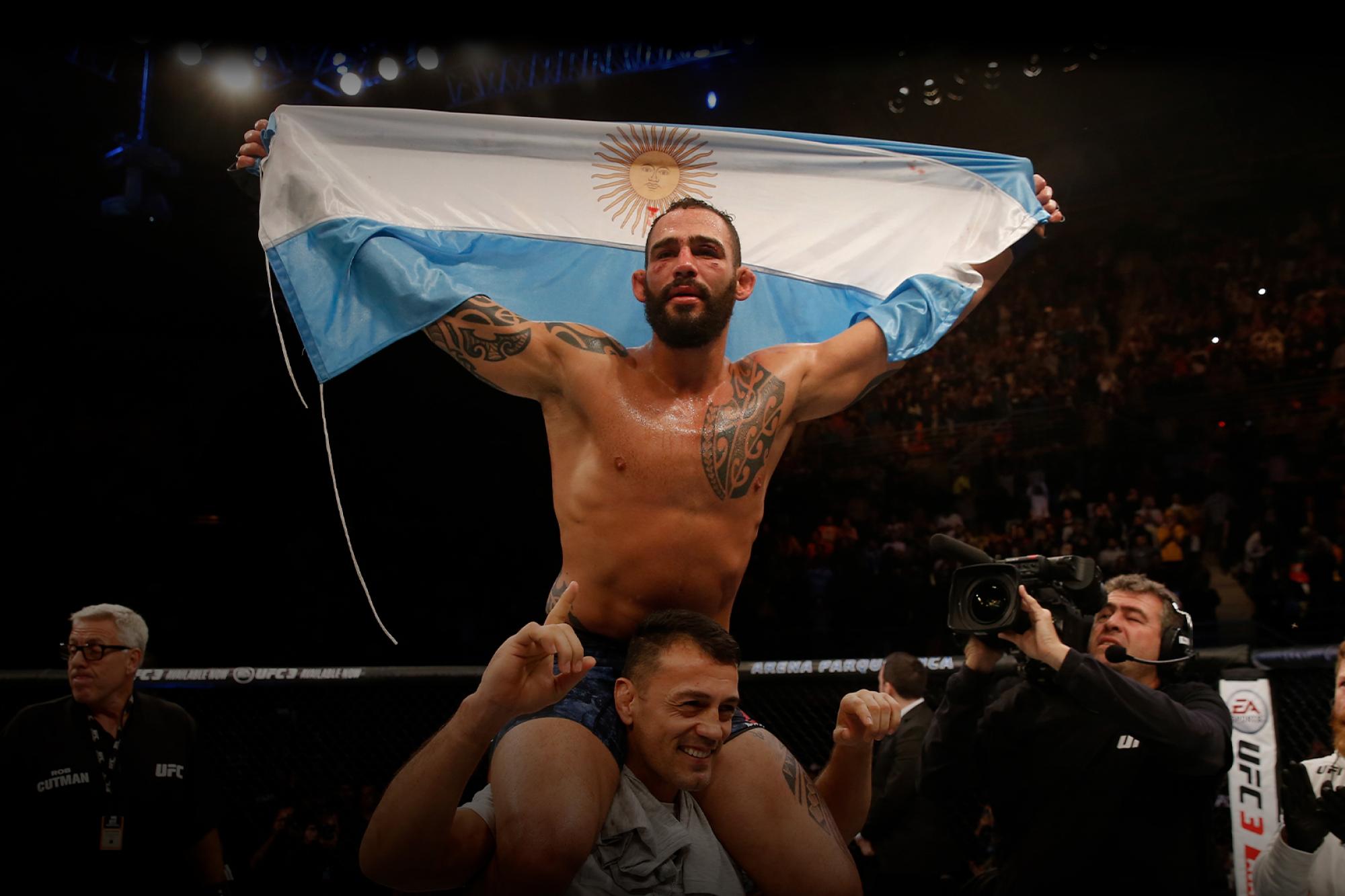 "The Argentine Dagger" Has Faced Each Obstacle Life Has Thrown His Way With Grace, As Ponzinibbio Has Made A Career Of Dealing With Challenges
By E. Spencer Kyte, on Twitter @SpencerKyte • Jun. 2, 2021

On November 17, 2018, Santiago Ponzinibbio competed in his home country of Argentina for the first time in more than eight years.

After moving to Brazil to chase his MMA dreams, the talented welterweight returned home, the prodigal son competing in the main event of the UFC’s first fight card in the South American nation, paired off against Neil Magny and entering on a six-fight winning streak.

Midway through the fourth round, with Magny hobbled by repeated punishing calf kicks, Ponzinibbio delivered the finishing blow, blasting his American counterpart with a piston-like right hand that sent him crashing to the canvas and the crowd into hysterics. 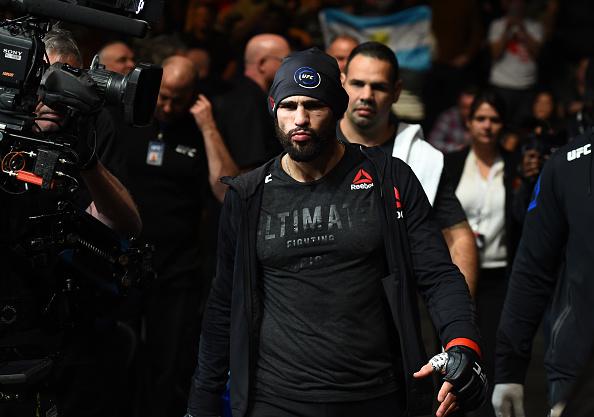 Santiago Ponzinibbio of Argentina prepares to enter the Octagon before facing Mike Perry in their welterweight bout during the UFC Fight Night event at Bell MTS Place on December 16, 2017 in Winnipeg, Manitoba, Canada. (Photo by Josh Hedges/Zuffa LLC)

He had won seven straight fights in one of the deepest, most talented divisions in the UFC and was closing in on a title shot.

Everything was lining up perfectly, and then he vanished, resurfacing in January opposite Li Jingliang on Fight Island following a 26-month hiatus brought on by a series of illnesses and infections that put his future in the Octagon in doubt.

“I had a staph infection in May 2019, and so it was October when we did an MRI and they told me, ‘You have an infection in your bone; you probably can’t fight ever again,’” began Ponzinibbio, who returns to action this weekend in a showdown with unbeaten rising star Miguel Baeza. “I had lost almost one year and they told me I couldn’t fight again.

“When they told me, I thought, ‘These guys are wrong; I’m going to be champion one day,’ but I was scared. It was very tough.”

Ponzinibbio is no stranger to adversity, having left his home country for Brazil with empty pockets and unbridled ambition before parlaying an 18-1 record on the regional circuit into a spot on the second season of The Ultimate Fighter: Brazil, where a broken forearm in the semifinals forced him out of the finale. 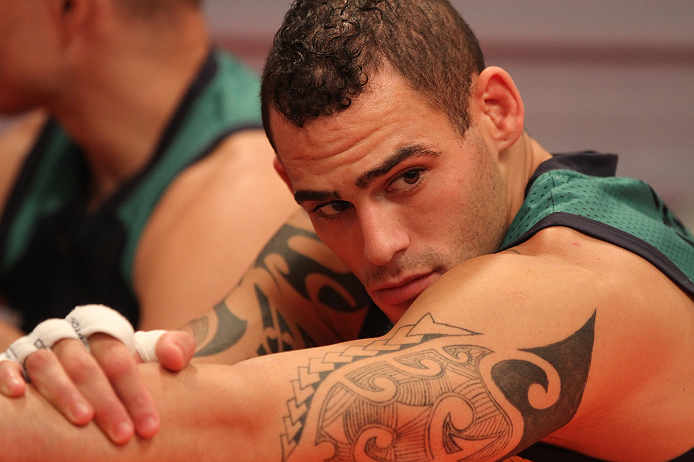 Santiago Ponzinibbio has his hands wrapped before his preliminary fight against Marcio "Pedra" Santos during filming of season two of The Ultimate Fighter Brazil on February 11, 2013 in Sao Paulo, Brazil. (Photo by Luiz Pires Dias/Zuffa LLC)

“I worked so hard, did whatever I needed to do, since Day One,” the longtime Top 10 fixture said, reflecting on the odyssey that ultimately brought him to the biggest stage in the sport. “I wanted to do MMA, so I moved to Brazil with no money, by myself. I started to learn, but nobody thought you could go from Argentina to the UFC, but I made that possible.

“I moved to Brazil, I made contacts, I fought, I went to the reality show, I got to the UFC, and not only did I get to the UFC, but I fought with the best and was in the Top 10 for a couple of years.”

And 791 days after he stopped Magny in Buenos Aires, the “Argentine Dagger” finally proved his doctors wrong, crossing the threshold into the Octagon to face Li.

He didn’t make it out of the first round.

“It’s the worst loss of my career — I’ve never lost in the first round by knockout; it was tough,” offered Ponzinibbio, who carries a 28-4 record into this weekend’s clash with the 10-0 Baeza. “It sucks after the good momentum I had, but it’s part of life.

“It feels bad because it’s one round and I couldn’t do too much of anything — I started to put my jab together, started to land a couple calf kicks, and one punch and the referee is stopping it. I thought, ‘No man, you’re joking with me. Please?’

“It’s very frustrating because I was so excited to be back, to get an eighth straight victory, to get back into position, and I can’t show anything. I started the fight a little slower than the other fights, but that’s normal after 26 months outside of the cage. I was in the hospital for almost one year straight.

“It sucks, but we can’t do anything; we can’t change the past, man,” he added, shifting his focus to the positive takeaways from the situation and the task in front of him now. “I think the main point here is that I’m fighting again quickly; I think that is the most important thing.”

Indeed, Ponzinibbio’s bout on Saturday is a welcome return to the steady workrate that produced the six-fight winning streak he carried into the bout with Magny in Argentina, as he collected those victories over the course of a two-year run beginning with a first-round stoppage of Andreas Stahl in Las Vegas and capped by a unanimous decision triumph over Mike Perry in Winnipeg, Manitoba, Canada.

In the three-and-a-half year since then, the American Top Team (ATT) representative has made just two starts, but he believes this relatively quick turnaround portends a return to the form that carried him to the brink of contention before everything went sideways in 2019. 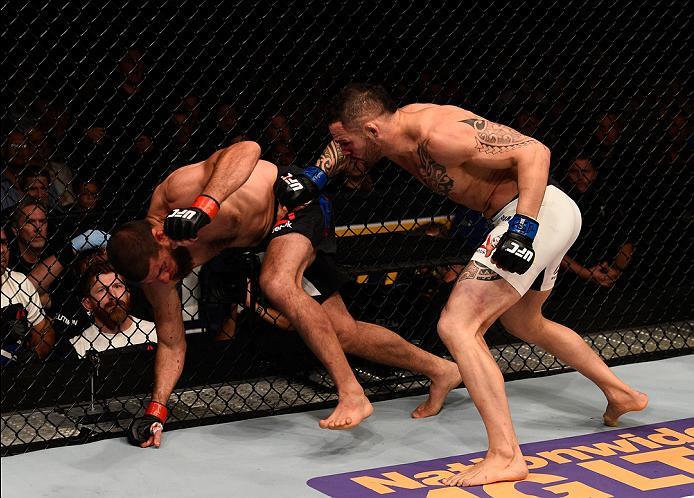 “For me, this is the miracle I was looking for,” he said of jumping right back into the fray against a talented foe like Baeza, who has earned a trio of second-round finishes in as many appearances to begin his UFC career.

“My focus is on this fight, but after this, hopefully I can come back soon. I feel I lost too much time and that’s frustrating, but I cannot do anything about the past; I can only do today and for my future, and I want to fight, and show the world who I am.

“I know my levels, and nothing has changed,” added the confident Argentinian. “I know I can beat anyone in the division; I know I can beat the champion today. I need to take advantage of this opportunity to fight and I need to put together a good effort in the fight.

“With a good victory, everything will come.”

That includes the personal satisfaction of knowing that the years of sacrifice and battling through this latest round of obstacles was all worth it.

“This is going to prove to me that I am right to continue forward,” began Ponzinibbio. “So many times in my life, things happened that made me think, ‘Why not stop? Why not do other things?’ but I know inside of myself that I am going to be champion of the world one day. When I win this fight, I’m going to say, for me, inside, ‘You see? You’re going to be world champion, man; relax.’” 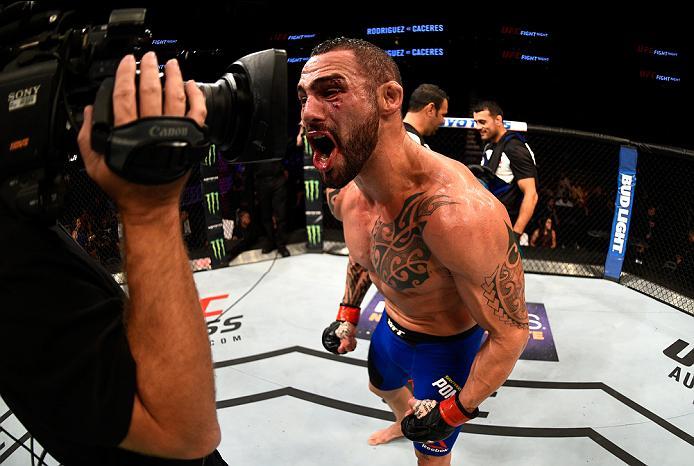 He laughed, as most of us do when we have a conversation with ourselves out loud and with others in earshot.

“You wait for months and months to fight and it’s 15 minutes, maybe 25 minutes,” he said, continuing his thought. “I had to wait so long with all these feelings. I do this is because it’s my dream, my career. I put everything into this. I paid such a high price to do what I love to do, so when the victory comes, it’s going to be such a good feeling.”

Between the fact that Baeza trains at MMA Masters, another South Florida fight team that has a territorial rivalry with ATT, and the tetra-pack of finishes he’s produced through his first three starts, Ponzinibbio is acutely aware of the skills his foe possesses and the threat he presents this weekend.

He’s younger, bigger, faster, and fighting with the confidence that comes from never having tasted defeat inside the cage; a formidable challenge standing between the longtime Top 10 fighter and his return to that position. 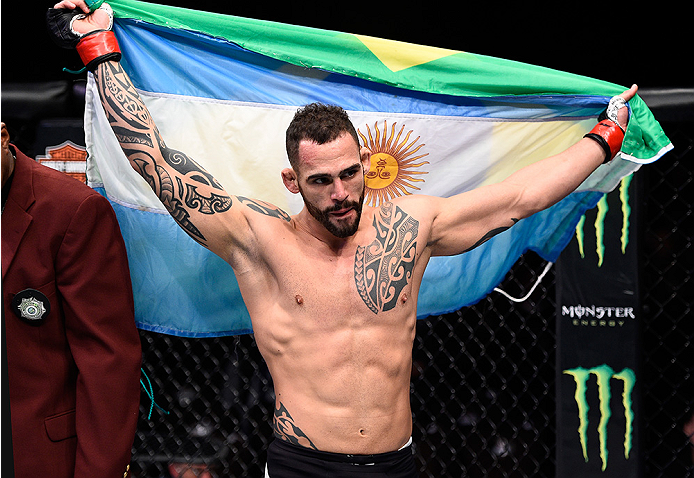 Santiago Ponzinibbio celebrates his win over Andreas Stahl in their welterweight bout during the UFC Fight Night event at The Chelsea at the Cosmopolitan of Las Vegas on December 10, 2015 in Las Vegas, Nevada. (Photo by Jeff Bottari/Zuffa LLC)

But Ponzinibbio has made a life and career out of dealing with challenges, and he expects to do so once again on Saturday evening in Las Vegas.

“Now there is one more thing I need to overcome and I’m going to do it; I’ve worked too hard. I’ve taken all these feelings from everything that has happened and used them as energy to push past my limits every day and make a better version of myself.

“I’m going to have the best fight of my career. You’re going to see the very best version of Santiago Ponzinibbio on June 5."

Be sure to tune in Saturday, June 5 to catch Ponzinibbio take on Miguel Baeza at UFC Fight Night: Rozenstruik vs Sakai. Main Card begins at 7pm ET/4pm PT on ESPN+.