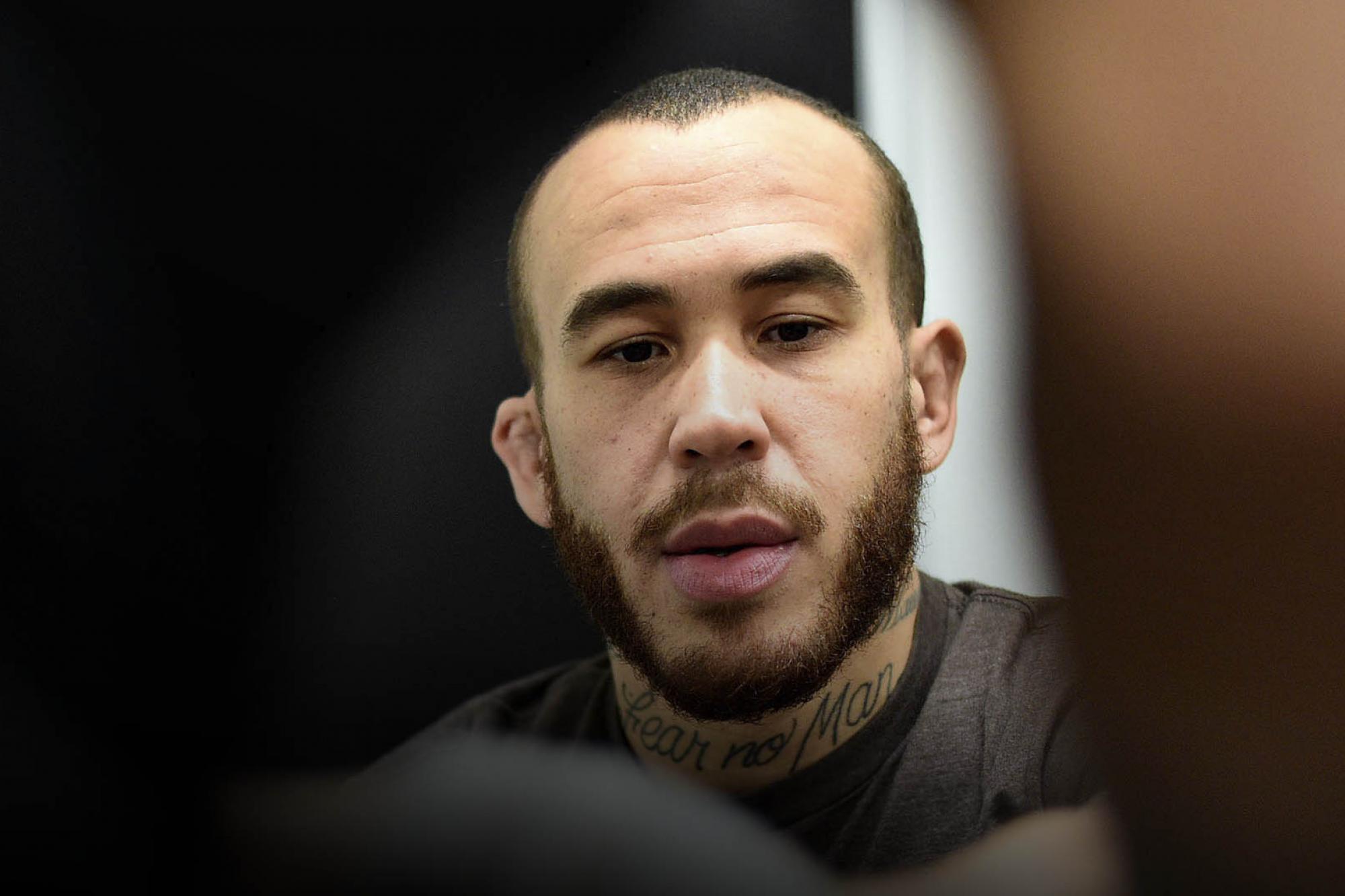 Every fighter has their own reaction to a first loss. Sean Woodson’s may be the most unique.

“I almost feel like somebody wrongly accused of a crime,” Woodson laughs when asked about suffering the agony of defeat for the first time against Julian Erosa last June. “Somebody who's innocent gets convicted of a crime and they're like, 'I swear I didn't do it,' and the only thing the police tell them is, 'Well, you'll have your day in court.' And that's how I feel. I'm like, man, that last fight, I swear that was not the real me. I feel like I've been wrongly accused of something. That was not the real me out there, and I've just been waiting on my day in court this whole time. And it's right around the corner. I can't wait to get out there and show them the real me.”

Woodson’s day in court, I mean, the UFC Octagon, arrives on Saturday when he meets Youssef Zalal at the UFC APEX in Las Vegas. It’s been a long time coming for “The Sniper,” with each passing week of watching UFC events only heightening his desire to return to active duty.

“I'm thrilled that it's almost here,” said Woodson, who nearly returned last November before a fight with Jonathan Pearce was scrapped. “I watch the fights every weekend, and every weekend I've just been getting more and more excited. It's getting closer, I'm counting down the days and here we are.” 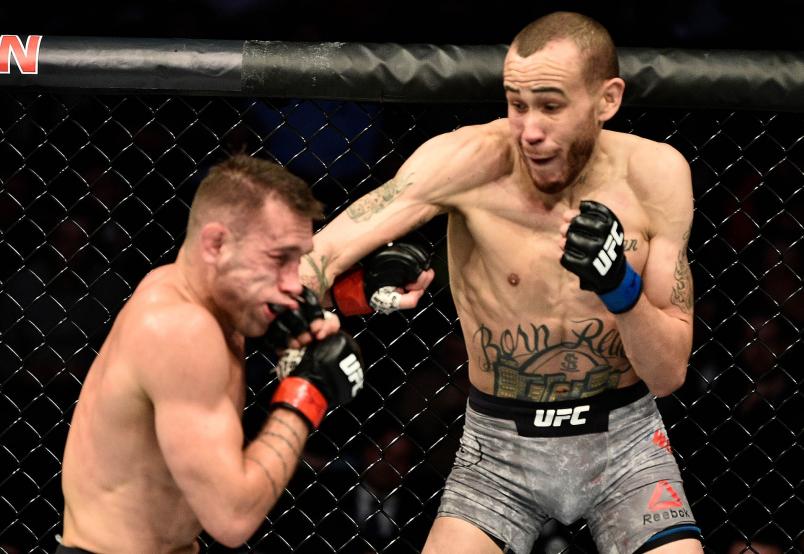 It’s what you expect, or at least want, to hear from a fighter coming back from an extended stay on the sidelines, but as Woodson explains it, this isn’t just an opportunity to get paychecks fired up again, but it’s the idea that he’s doing something not many can, giving him the opportunity to actually live a life on the road less traveled.

“I definitely take pride in that, and that comes along with it,” he said. “I know as miserable as I might be during a weight cut, nothing comes easy and anything great in life, it's difficult and it comes with adversity that you've gotta tough through. But that's what makes it all worth it, knowing that I'm creating memories and doing something that only a percentage of people will attempt to do, and I'm not just existing. I'm trying to live and accomplish things and make my dreams come true. So the fact that I'm creating memories that I'll be able to talk about with my family for years to come and show old footage and tell stories to my kids, it makes it more worthwhile.”

It's a mature outlook from the 28-year-old St. Louis native, something he credits to having older parents.

“I was raised old school,” he said. “I played my fair share of video games, but if I could have my way, I was always outside playing and I'm just really big on ‘you only live once.’ Life's short, and I'm just trying to soak up every day and make the best of it and not take anything for granted. I feel like a lot of people are just surviving and doing the bare minimum just to get by instead of trying to thrive and live life and take advantage of all the beautiful and real fun things in life. The things that make me the most happy in life aren't the things that money can’t buy; it's appreciating the little things.” 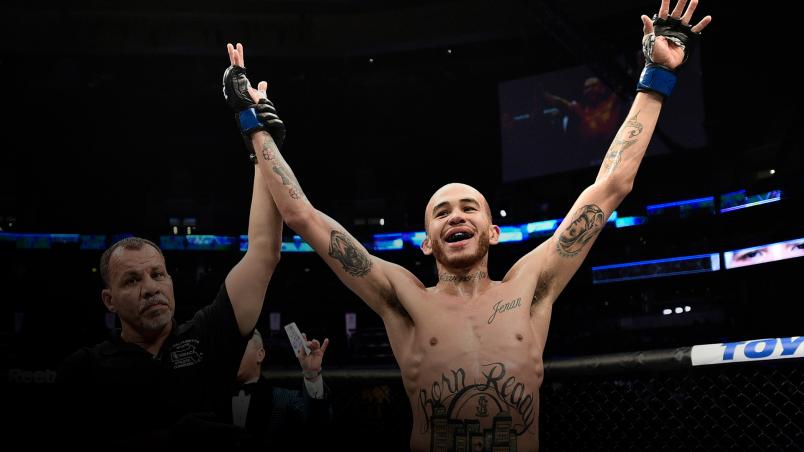 Sean Woodson reacts after his decision victory over Kyle Bochniak in their featherweight bout during the UFC Fight Night event at TD Garden on October 18, 2019 in Boston, Massachusetts. (Photo by Chris Unger/Zuffa LLC)

Don’t mistake that appreciation for life and general all-around good mood for complacency, though.

“I believe a happy fighter is a dangerous fighter,” he laughs, and he’s probably right, though “happy” wasn’t the adjective you would have put on his mood after the Erosa fight, where he started strong and was ahead on one scorecard and even on the other two heading into the final round. But it was in that final round that Woodson tired and Erosa surged, with the veteran showing off all his veteran tricks en route to a submission win. It was the type of defeat Woodson can take a lot of lessons from.

“I definitely learned a lot from that fight,” said Woodson, now 7-1 as a pro. “He got gritty, he walked me down and he took shots that a lot of guys I fought in the past weren't able to take, and he pulled out that veteran card.”

Someday, Woodson will be doing the same thing on some Octagon rookie. But, for now, he’s still the prospect climbing the ranks and learning new things every day. The first lessons from the Erosa fight? Don’t lose faith and simply get ready for the next one.

“I was really upset the night it happened, and then right afterward I just told myself, okay, the facts here are that I know I'm gonna get another fight, I'm gonna get a chance to redeem myself,” he said. “And I only focus on what I can control, so my best option and only option was to just do everything I can to be prepared for whenever that day came. And that's what I've been doing. I'm still mad about the loss; I still remember it like it happened yesterday, even though it's approaching a year since it happened. I've had a chip on my shoulder this whole time, but I've taken that into training and preparing and I've been waiting on my day to redeem myself.”